Cookie preferences
This website uses cookies, which are necessary for the technical operation of the website and are always set. Other cookies, which increase the comfort when using this website, are used for direct advertising or to facilitate interaction with other websites and social networks, are only set with your consent.
Categories
Information

Nails with a message 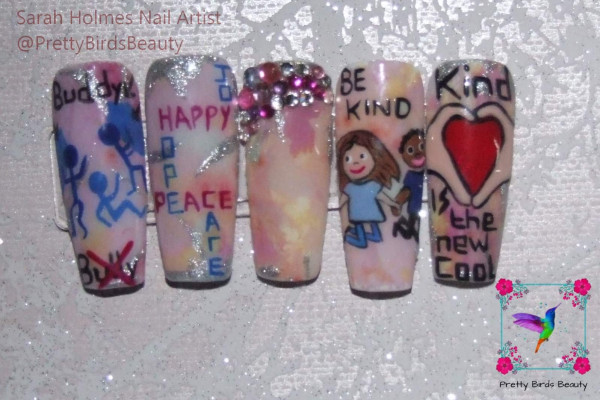 I decided to do this set in honour of my 12 year old daughter who has suffered badly at the hands off bullies.

My daughter had been getting picked on for her ill health and low immunity for a while but it was something we could help her shrug off. Then covid happened. We actually had our happy, bouncy, chatty daughter back and it was so lovely to see her laughing and smiling again.

Then the kids returned to school after covid restrictions lifted. Jasmine had 2 good days but then she started coming home crying because some boys and girls were heckling her. As it got worse, she began scribbling all over her hands and arms up to her elbows, I got her notebooks so she could scribble on the paper but it didn't work.

Kids were passing mean notes about her around the class and she would constantly get upset and become ill. I tried phoning the school and leaving messages for her head of year to call me back but they never did.

Jasmine started complaining of serious back pain after she had an accident at the skate park. After months of tests, the doctors believe it was painful in the beginning but then it became a neurological issue when the bullying got worse.

During the school holidays she begged us to home school her, I looked into it but thought we had to pay for it which we couldn't afford. I sent her to my mum and dad's in Lincoln for 2 weeks and my parents noticed how terrified she was of going back to school.

Finally, when the kids went back, I got hold of her head of year and she told Jasmine to go to her when ever she needed help but when Jazzy tried that, the woman was never available and never followed up with her later. The bullies targeted her friends too so Jasmine began getting excluded during break times and she no longer had people to walk to and from school with. My daughters mood was getting lower and lower and she stopped playing out and retreated further and further into herself.

One day in September I noticed she was wearing a baggy jumper when it was warm, she said she was cold so I thought nothing off it. A day later I spotted her on the landing and she had deep cuts on her hands and arms. After talking to her about it she finally broke down and said her only friend (who was also getting bullied by the same group) would take all of jasmine's pencils away. It turns out that she would sharpen her pencils and then use them to make deep cuts on her hands and arms. As soon as this came out i rang the school the very next day and all her head if year could say was that she was surprised as Jazz is always so happy in school. After speaking to her friend we found out that this was not true as Jasmine was crying in class, she was self harming during the lessons and no-one even noticed. I was disgusted with the lack of care the school showed my daughter. Much more happened but I have only written what my daughter wanted me to say.

Now my daughter is being home schooled and is on the mend. Her hands and arms are badly scarred but with time they will hopefully fade a bit.

I think bullying is a serious problem not only across UK schools but abroad as well. If the teachers don't step up to protect out children, how can they expect us to feel comfortable leaving our kids in their care.

My daughter is on the road to recovery with the help of family, doctors and she's been referred to Cams. Unfortunately, this doesn't help the other kids who are going through this on a daily basis.

My nail design has 5 dark/sad nails and 5 good/positive nails and I did these in honour of my daughter who has come so far and who is continuing to improve as each week goes by. Bullying harms so many children and some of the harm that is done doesn't leave them, even when they become adults.

Bullying needs to be addressed and schools should show a united front and have a No Tolerance attitude towards it. They have a responsibility to protect the children they are teaching.